In February, 2015, Elinor had a single ewe lamb and Daria followed a month later with twins, a ram and a ewe. I wethered the ram,Vader, as his jet-black coat did not lighten and I wanted to keep him, but not as a breeder. His sister, Valaree lightened up to a pretty silvery outer coat with a creamy, crimpy undercoat.
Eli’s lamb, Kolleen (Zipper, because of her speed) is a medium grey with delightful purls.

I lost Daria in November to some sort of trauma. I think a  tree limb fell on her and she had internal bleeding. At least, that is what it looked like when I butchered her out. I was able to save her pelt and sent it to be tanned, and her meat provided the dogs with food all winter.

All of the lambs remain at the Farm and the ewelings will be bred this spring to another new addition, Big John. He is a medium-sized direct son of the Swedish Mr. Big. His fleece has large, soft purls and he imparts fineness and conformation to his offspring.

With the exception of John, all the sheep were fleece tested and all came back within tolerance, the lowest being Valaree at 33.1 microns and Eli being the highest at 40, though that was on her shoulder which is a typically coarse area. Valaree should benefit from John’s genetics and there is always the option of bringing in a Blue-faced Leicester ewe and upbreeding her.

All of the sheep will be sheared in early April just ahead of the Shepherd’s Extravaganza, so I can hopefully generate interest and sales from handspinners there. I am toying with the idea of rinsing the sheep about a week before shearing, a technique I read about that is done in Sweden to clean the wool. I might try it on one or two of them and compare the results.

In poultry news, I bought a cabinet incubator and tried it out on 6 eggs from our mixed flock, and 24 mixed-breed eggs from a local chicken person. Spectacularly, I had an 80% hatch and all of the beautifully-colored chicks are healthy and growing fast! As I now have the ability to hatch eggs, even offer that as a service, I bought a breeding pair of Cornish chickens. I am also expecting Chantecler eggs from two different breeders in the next couple of weeks. Chanteclers are the only Canadian breed of chicken, developed by a monk at the Cistercian Abbey in Quebec in 1918 as a dual-purpose breed capable of withstanding the severe winters. I prefer the original white color and may cross these with the Cornish to improve egg production and carcass weights.

A few more Birchen Marans from Greenfire Farms in Tennessee are on the way, to provide some color to the egg orders. Greenfire Farms is also providing 6 Barbizeaux chicks, which is a striking French meat chicken. It is a rare breed, even in it’s native country and is famed for the tenderness and taste of its meat. I hope to be able to offer these chickens as part of a premium CSA box next year.

In goat world, I bought a Boer doe from some solid championship lines who sold exposed to a red and black buck. She gave me 2 buck kids in February 2016, a red boy with a couple of pale dapples and a red boy with a white leg, so kind of a paint. They are both calm and friendly and stocky and I want to keep one of them for the lines, but I just can’t decide! Their average daily gain is hovering around .6, which means they gain an average of over a half a pound a day! That is above average and is a testament to Red Pearls rich milk!

I will be picking up a black-headed buck kid next week who is a grandson of LLBG Mr League (“Camo”). Camo throws outstanding dappled kids and I hope this boy follows suit. I will breed Emi and Char to him and breed Cami and Bebe to Pearl’s buck. I have to look at a Kiko buck also, to generate some meat sales but that is down the road aways.

The garden is fenced and the north pasture is seeded with BOSS. The high tunnel has the bones up and I just have to figure out the purlins and supports, then I can thrown the film over it and build the barn inside.

Gio the Maremma is being offered up for stud this year, until October 2016. I probably shouldn’t look at any puppy pictures or I will end up with a field of fluffy puppies!

Ally the ninja English Shepherd joined Gio is guarding duties in February as well. (I don’t recall February being so busy…perhaps because I was so busy!). She loves to run after the little baby goat kids and jump on what they jump on. That behavior won’t last, though. She will be the main yard and chicken protector and Gio will have the stock. He has been wool pulling a little and I don’t know if it is because he is trying to get them away from something they shouldn’t be into or its an assertive, unwanted behavior. With the sheep moving into an adjoining pasture, that should cease, whatever the cause.

I will end with a few photos of the new kids on the block and a welcome to those of you joining the blog from the brand-new web site! 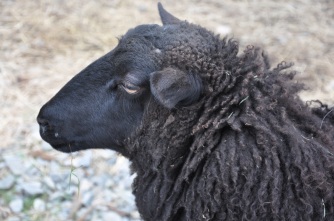